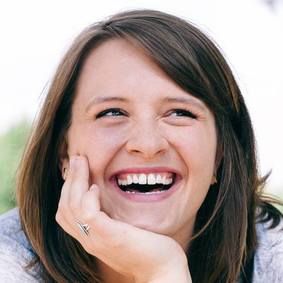 Sammi Cains is a writer living in Los Angeles.

Sammi's pilot script Joan at Large​ placed in the Top 10 of the 2020 Table Read My Screenplay Park City Contest and has advanced in the Sundance Episodic Lab.

Sammi's first writing and producing endeavor was the web series In Your Dreams. In Your Dreams was an Official Selection at the 2015 LA WebFest. Sammi and series director Tyler Newhouse took home the award for Outstanding Editing in a Comedy Series. Sammi and Lisa were nominated for Outstanding Writing in a Comedy Series. In Your Dreams was also an Official Selection of the 2014 NYC WebFest. Sammi and Lisa were named Favorite Duo of the Week on Indie Series Network for the episode titled "Work It Out."

A born and raised Hoosier, Sammi attended Ball State University in Muncie, Indiana where she received a Bachelor of Fine Arts in Acting. During her undergrad, she traveled to The Playwrights' Center in Minneapolis to workshop a play she wrote in collaboration with 9 other undergraduate students. The play, Daughters of Trinity, based on the book Their Day in the Sun, centered around the untold stories of four women who worked on The Manhattan Project.

For the past few years, Sammi has been fortunate enough to serve as a showrunner's assistant, writers' assistant, and script coordinator on some fantastic TV shows.